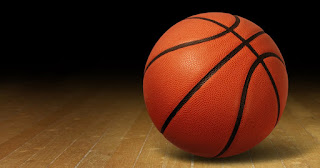 We have a sloped driveway.  When repaving it because of the cracks from our monster of a Magnolia tree, I was thinking of the streets of Heidelberg Germany we had walked on, not the boy that might enjoy bouncing a basketball on it someday.  The slope would have gotten in the way anyways, right?  So this past summer my basketball enthusiast of a son asked if we could go to the park as often as possible to practice because cobblestones and a slope don't allow for a hoop.  Dad will take him on his days off and I'll take him on mine.  Ok, plan made.  So one Friday off we go and he decides to take two balls, one that is his practice ball, one his new Spalding ball that he recently received for his birthday. Guess which one sat protected, still on the court?  Yep, like a new pair of white shoes, the orange globe sat still and protected from the one muddy puddle Max was sure it would fall into.

We proceeded to play with the old ball, shot hoops, I even made him run some drills.  Mind you, I don't really know what I'm doing.  I'm pretending.  But he's doing it anyways.  We're having fun.  He even thinks I'm pretty good!  He must want something.

Along comes two older gentlemen that are dressed to indicate they are probably Sikh in culture.  We live in an area where people's clothing can reveal their cultural origins, which I actually really love about our neighborhood.  Today these men brought their grandson to play while they talked on the picnic tables.  I've said hello to these men before many times but they have never responded back.  I still try.

After exchanging greetings with the grandson, he took one side of the court, so we scaled back and shot hoops on our side. He was playing with a small blue bouncy ball.  Not a basketball, a bouncy ball.  Max noticed the boy's ball in comparison to his two.  He asked me why he only had that kind of ball so we quietly discussed possible reasons.  We went back to playing.  After a while Max said he'd like to give him his ball.  But then it came...the ball that he wanted to give was the one that he was protecting, the one he hadn't even played with yet that day... the prized Spalding sitting on the court.  Pride welled up in me as he dropped his old ball, picked up the crisp new ball and walked over to the little boy, introduced himself, asked his name and offered his birthday gift to him.  The boy was thrilled.  Those gentlemen now say hello to us because Max gave his best.  Walls came down.

When God was mapping the world he had a manger in mind.  He had his prized Son ready to offer and who was willing to go, gently placed in a manger and available to be the gift that we can pick up and hold in our hearts.

As we walk through this Advent season, we might want to consider the innocence of a child, offering our best to Him because he has offered it all to us.  When we do, the walls that have been built in our lives for understandable reasons can begin to fade away.  The story of the season is real.  Love was found in the manger, and sometimes even on a basketball court.